With catalysts like the expansion of the internet, the rise of personal computers and mobile devices, and rapid growth for e-commerce and software-as-a-service businesses, it shouldn't come as much of a surprise that the technology sector has outperformed all others over the last couple of decades. That could very well be true over the next two decades as well.

There's a good chance that technology companies will continue to lead the market as they help create and benefit from far-reaching trends that unlock new potential across industries. With that in mind, growth-focused investors looking for long-term plays in the tech space may want to consider adding Xilinx(NASDAQ:XLNX), JD.com (NASDAQ:JD), and Elastic NV (NYSE:ESTC) to their portfolios.

A semiconductor play for the future of AI and communications

Xilinx is a semiconductor company that's best known for pioneering, and continuing to lead, the market for field programmable gate array (FPGA) chips. These programmable semiconductors offer superior versatility and can provide better performance than generalized integrated circuits after they've been tailored to complete a user's desired tasks. FPGAs have gained favor in the telecommunications industry because some functional changes can be made quicker and more cost effectively than would be possible with general or application-specific circuits, and it looks like demand for this category of chips is set to grow substantially.

Xilinx's FPGA hardware is seeing increased adoption from large data-enter customers like Amazon.com, Microsoft, and Alibaba. And its leadership position in this corner of the chip market positions the company for impressive long-term growth as businesses build out their cloud and artificial intelligence (AI) infrastructure.

The chipmaker has also branched into new hardware family designs, having recently launched its AI-focused adaptive-compute-acceleration-platform (ACAP) chips. The company estimates that its new Versal ACAP chips are capable of carrying out processes for data center functions, 5G, wired networks, and automated driver assist programs at speeds that are 20 times faster than the best FPGA systems and over 100 times faster than traditional central processing units.

With a market capitalization of roughly $24.5 billion, Xilinx isn't a small company, but it still has lots of room to grow as its products see increased demand tied to data centers, AI, and new networking technologies. Xilinx also sports a 1.5% dividend yield and a 14-year history of annual payout growth, giving the stock a significant returned-income component in addition to big growth potential. Shares trade at roughly 28 times this year's expected earnings.

Trade uncertainties have loomed over Chinese companies and added downward pressure on stocks that might otherwise be putting up stronger performance. E-commerce player JD.com has managed to rally roughly 50% across 2019 after getting rocked by sell-offs in the second half of last year, but shares are still down roughly 25% since the start of 2018 — and 38% from their all-time high. Investors should approach JD with the understanding that the road to big returns could be bumpy and see outsize impact from macroeconomic shifts, but the prospects remain appealing.

JD's focus on high-quality electronics and consumer goods has helped differentiate its e-commerce platform from competitors like Pinduoduo and Alibaba's Taobao (which both have reputations for featuring counterfeit and low-quality products). And the business looks primed for big long-term growth as China's online retail market continues to expand. The focus on quality products and reliable service will likely work in the company's favor as incomes rise for Chinese citizens and per-capita discretionary spending increases.

JD should benefit from internet use and shopping trends as well. Roughly 800 million people out of China's 1.4 billion total population have already connected to the internet — making the country the world's largest internet market and still leaving room for big connectivity growth. China already is the world's largest e-commerce market and overall retail market, and it's likely that an increasing share of the country's total consumer spending will take place online.

JD's infrastructure network boasts approximately 600 warehouses, 7,000 delivery stations, and a massive fleet of delivery vehicles — including drones and delivery robots. The company has the opportunity to improve margins as it automates more steps in its supply chain and leverages its distribution advantages to provide more-efficient services to a wider range of third-party businesses.

The e-commerce company's shares trade at roughly 35 times this year's expected earnings, which might look too rich for some investors given that the trade situation has yet to be definitively resolved and Chinese economic growth has recently been slowing. But JD's forward P/E value is relatively low compared with levels in recent years, and the company's current valuation leaves plenty of room for growth as China's online retail market continues to develop over the next decade and beyond. 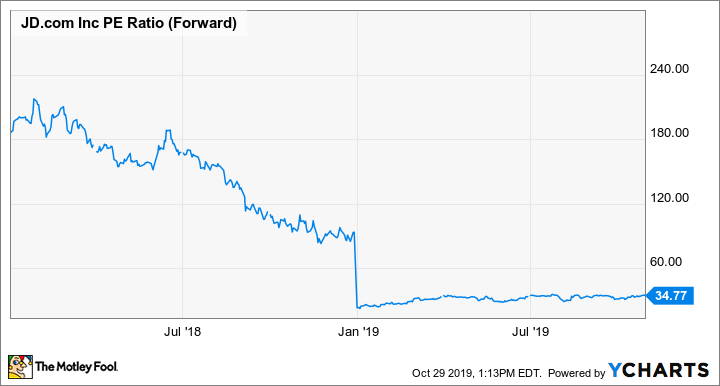 Having access to valuable data and the ability to sort through it and generate actionable insights will be one of the most important components to business success in the 21st century. That's especially true in technology ventures, but the importance of big data extends to nearly every major industry, and Elastic's collection of search and data management services have it positioned to play a key role in helping businesses manage and utilize their information.

Elastic is an open-source software company that made its market debut last year, and its enterprise search and data services could see big demand increases that help power the stock to big returns. The company makes its core software available at no charge, which might initially sound like a confusing decision, but it's an approach that has allowed the business to rapidly build an enterprise user base and then sell additional services that augment its core offerings. This model allows the service to easily land new enterprise users, and Elastic can then sell a range of expansion services including machine learning applications, advanced analytics, and support services.

The business already counts large enterprises including Cisco Systems, Adobe, Uber, and Sprint among its list of enterprise clients, and it managed to increase its customer count to more than 8,800 at the end of its July quarter — up roughly 60% year over year. The company is also having success in bridging users to expanded use of its services across its software suite. Elastic reported a net expansion rate greater than 130% in the last quarter, meaning that existing customers increased their spending with Elastic by more than 30% on average over the trailing 12 month period. These trends helped the company to grow currency-adjusted sales 62% year over year in the first quarter and roughly 70% in the last fiscal year.

Elastic had its initial public offering in October 2018, pricing its stock at $36 per share and seeing its share price nearly double in the first daily session. Today, the stock trades in the $75 range and has a market capitalization of roughly $5.9 billion. The company isn't profitable yet and is currently valued at a lofty 14.5 times this year's projected sales. But the business provides a highly regarded product suite in a niche that looks primed for sustained growth, and the stock could deliver more strong performance as the market expands.

Read more at the Motley Fool.