I’ve been a professional investor since the 1980s, and I’ve never seen a better environment for gold than right now…

Every single metric I look at is arguing for higher gold prices – driven especially by the whole world embarking on the greatest round of money-printing we’ve ever seen.

That trend was already in full swing before the pandemic hit. But it went absolutely ballistic last March, with an incredible $18 trillion of new money pumped into the global economy before the end of 2020.

And it’s continuing full force this year as well.

As I write, we now have the latest U.S. stimulus package – worth another $1.9 trillion – starting to work its way through the system.

The influx of all of this new paper money reduces the value of the dollars already in circulation. And we’ve already seen this happening.

As I’ve told you before, this is precisely why the greenback lost 13% of its purchasing power against a basket of foreign currencies last year.

And that dollar devaluation – which will continue – has real consequences.

And it means people should be flocking to investments and assets that can protect their wealth against the ravages of inflation.

The Former Guardian of Wealth Isn’t Cutting It Anymore…

For thousands of years, the default choice for protecting wealth was gold. When things looked spooky in the market, investors flocked to gold.

Yet look at this chart of the widely followed SPDR Gold Shares ETF (GLD), which tracks the price of gold bullion… 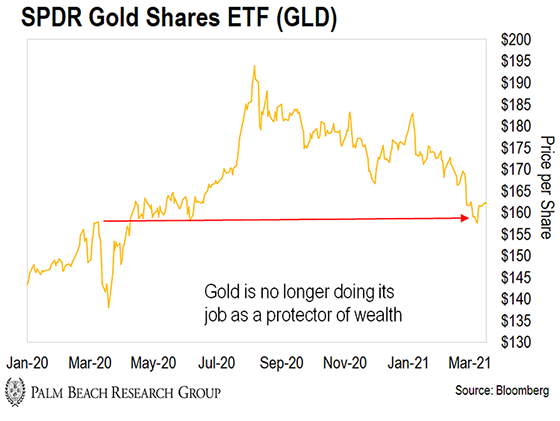 As you can see, after a marginal rise, gold has fallen right back to about where it was when the pandemic hit the United States in March 2020.

So even though the United States spent more than $5.3 trillion on coronavirus relief in the last year… and our stimulus spending (more than we’ve seen from any other country on the planet) is worth a staggering 27% of our annual GDP… gold hasn’t done a thing.

This tells me three things:

There’s only one reasonable explanation for what’s happening…

Gold has finally been replaced by something better.

And that something is bitcoin.

For proof, all you have to do is look at this chart of the cryptocurrency going back to the start of 2020… 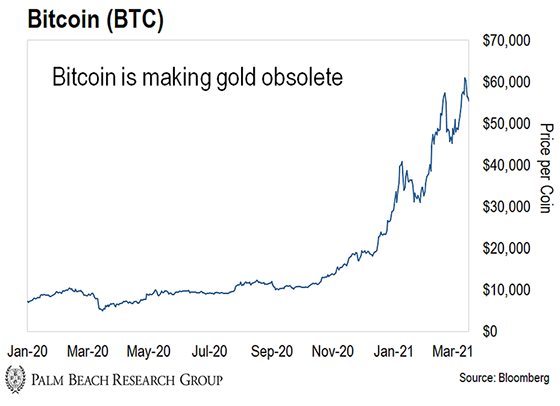 That’s precisely what gold’s chart should look like based on the money-printing over the same period.

Now, if you’re a gold bug, it might be hard to accept that anything – let alone bitcoin – could replace gold.

As Scientific American explains it:

In 1907, there were 140,300 cars registered in the U.S. and a paltry 2,900 trucks. People and goods still travelled long distances on land by railroad, and short distances by foot or horse-drawn carriage…

So it’s not hard to imagine that bitcoin is replacing gold in the very same way. When you break it down, you can see they function similarly and offer many of the same benefits.

So that makes gold the horse… And bitcoin the car.

And as more people come to terms with that idea, we should see bitcoin’s price continue soaring higher and higher.

We’ve already seen some of America’s oldest financial institutions align themselves to bitcoin. That includes stodgy names like the Bank of New York Mellon, which has been around for over 230 years.

As I’ve written to you before, we know younger Americans will be inheriting $68 trillion from their parents and grandparents over the next 25 years.

According to studies, we also know this group overwhelmingly prefers digital assets to gold. One study from DeVere Group, an independent financial advisory, reported more than two-thirds of millennials said they prefer bitcoin over gold as a safe-haven asset.

The shift is already playing out right before our eyes.

My New Stance Is Very Clear: Choose Bitcoin Over Gold in Just About Every Instance

I’ve liked gold for as long as I can remember. And as recently as a few months ago, I was telling readers to increase their holdings.

However, I’m not afraid to admit a mistake when the evidence is overwhelmingly against me.

I’d much rather tell you I was wrong and get you on the right side of the markets as quickly as possible.

This is one of those times.

I no longer expect gold to adequately protect your wealth against the money-printing happening right now.

I believe bitcoin and other cryptocurrencies are doing a far better job – and will continue to do so going forward.

More than that, I believe they will benefit from tremendous demand as the rest of the world wakes up to the same realization.

Now, am I saying this means you should sell every piece of precious metal you own?

I think a very small allocation to gold still makes sense as “end of the world” protection – say, in the event of a complete power grid failure or something else equally catastrophic.

Under some largely unforeseeable event like that, a tiny stake in gold could end up skyrocketing overnight and keep you afloat.

However, I believe it’s critical you have a much larger stake in bitcoin and maintain exposure to other cryptos.

If that means taking money out of gold, so be it.

Increase Your Allocation to Bitcoin

But as bitcoin continues to overtake gold, we’re adjusting our recommended weighting to up to 10% to bitcoin and up to 1% for gold.

In short, I’ve been bullish on bitcoin and other cryptos for many years. My readers have already had the chance to make anywhere from 22,656% to 156,753%.

But at the time of my earliest recommendation, bitcoin still had many risks. So, we combated those risks by using small position sizes.

With the traditional financial system now embracing bitcoin as a serious asset, we can safely say bitcoin deserves a bigger weighting in the portfolio. My recommendation is to swap your gold allocation to bitcoin.

For example, if you have 10% of your assets in gold and just 1% in bitcoin, I’m recommending you reduce your gold allocation to 1%… and up your bitcoin allocation to 10%.

Don’t worry about the fact that bitcoin now appears “expensive” at around $59,000. In my opinion, we’ll see $500,000 bitcoin within five years. If I’m right, it means you’ll make a staggering compound annual return of 55% per year.

Can gold do that over the next five years? I think not.

Based on what we’re seeing play out at the moment, I’m now more bullish than ever on the entire crypto ecosystem. Because as I’ve told you plenty of times, as bitcoin goes… the whole crypto market goes.

If appropriate for you, my recommendation is to increase your bitcoin exposure now. That is why I am raising the bitcoin buy-up-to price to $75,000.

While we’ll see dips along the way, you can think of them as buying opportunities.

As people come to understand – as I have – bitcoin’s superiority, we’ll be ready for the surge of investors flooding into it… and taking bitcoin to heights that will overthrow gold.

[Learn More: How to Maximize Your Profits from this Massive Crypto Event]