Alternative energy — solar, wind, hydropower, biofuels, and the like — has been the shadow hanging over broader energy stocks for years. Costs for solar and wind have declined precipitously for decades and are now largely commercially competitive with conventional fossil fuels. The spectre of alternative energy upending fossil fuels as the preferred choice has consistently been the counter to any fossil fuel investment thesis.

At the same time, though, few public companies in alternative energy have been good investments over this time frame. That rapid decline in costs has translated into a race down the commodity curve for many technological developments, which doesn't tend to translate into great returns on capital.

As is the case in any industry, though, there are some great businesses that rise above the fray. Those ones are likely to have the best chance at succeeding long term in this business. So, we asked three of our Motley Fool contributors to each highlight a stock they think is a good investment in alternative energy today. Here's why they picked First Solar (NASDAQ:FSLR), Brookfield Renewable Partners (NYSE:BEP), and SolarEdge Technologies (NASDAQ:SEDG).

Optionality is underappreciated in this solar stock

Tyler Crowe (First Solar): Perhaps the greatest challenge for solar panel manufacturers is that technology changes so rapidly that companies are constantly spending on research and development and investing in retooling manufacturing facilities for the latest innovation in panel technology or manufacturing. It's capital intensive, and the relatively low margins and cyclical nature of the solar industry make it incredibly challenging for companies to generate returns.

First Solar may have to run in the same rat race as the rest of the solar industry, but it has one thing that few others have: a huge cash pile to invest. At the end of the most recent quarter, First Solar had more than $2 billion in net cash on the balance sheet (net cash is cash and short-term investments minus debt). This cash pile helps in two big ways: It gives the company the freedom to invest in new technology developments and expanding capacity without having to rely on external capital, and it generates a modest income from the interest earned on its short-term investments.

Certainly, buying First Solar because it generates a modest amount of income from its cash pile is by no means a major component of a buy thesis, but it is a small example that shows how the company has the options and flexibility to invest through the ups and downs of the turbulent solar market. Don't underestimate a quality like that when investing in this rapidly shifting industry.

Matt DiLallo (Brookfield Renewable Partners): Despite its promise and growth prospects, the renewable energy sector has been a challenging place for investors over the years. The industry has battled intense competition and aggressive use of outside financing to power growth, which has caused most renewable energy stocks to underperform.

Brookfield Renewable Partners, however, has bucked that trend. The hydroelectric-focused company has generated a 16% total annual return since its formation, which has obliterated the 7% total return of the S&P 500 over that time. Brookfield has delivered this significant outperformance by taking a more conservative approach and focusing on investing for value instead of growth.

One of the foundations of Brookfield's ability to create value is its industry-leading balance sheet. That has given it the financial flexibility to capture investment opportunities as they arise. Another aspect of Brookfield's approach is that it focuses on buying and building renewable energy assets that will earn a high return on investment. One way it does this is by looking for opportunities where it can acquire assets for less than their true value. For example, it favors buying poorly run businesses because that enables the company to leverage its financial and operational know-how to get the most out of these acquisitions.

Brookfield firmly believes it can continue creating value for investors in the coming years. The company estimates that it can improve the underlying profitability of its existing assets to help grow its cash flow at a 6% to 11% annual pace. This outlook will allow it to increase its 5.4%-yielding dividend at a 5% to 9% yearly rate. That puts it on track to continue generating double-digit total annual returns in the coming years, making it an excellent stock to buy right now. 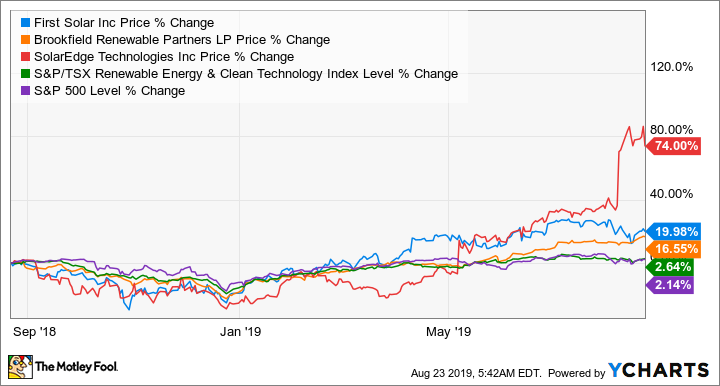 The metrics don't reflect its prospects

Jason Hall (SolarEdge Technologies): With a stock price that's already gained 135% so far this year, I can understand if people struggle to consider SolarEdge a stock to buy right now. And since its core business is largely making and selling power optimizers and power inverters, which are generally considered commodity items, plenty of observers have reason to see the company eventually see its industry-leading margins and market share get squeezed.

And while the risk of competition and disruption shouldn't be dismissed out of hand, SolarEdge has a track record as being the disruptor and it's building on that lead. But even that's not what makes it worth buying now and potentially holding for the long term — because, honestly, I don't know that even its strong prospects as a solar component supplier make it worth buying for 36 times trailing earnings.

But what does make it a buy-now stock is what management is doing to expand beyond its core business. SolarEdge is leveraging its strengths in the solar space to expand into energy storage, uninterruptible power, and powertrain/charging systems for electric vehicles. The company has made a number of key acquisitions over the past couple of years that will expand its core business across these new — yet related — segments of the renewable energy future.

The earnings potential for those new opportunities aren't reflected in the results — hence the valuation — derived from its current business. But over the next few years as those new segments begin contributing to the bottom line, investors who “overpay” at today's multiple should be happy that they did.