The current stock market reminds me of one of my favorite movies.

I probably liked this film so much because in part it’s about wine and the love of it. It plays out among the vineyards of California’s Santa Ynez Valley, after all.

But it’s also about a man’s life – portrayed by the excellent Paul Giamatti – that isn’t going particularly well or badly.

It’s just going kind of… blah. Or as the title suggests, sideways.

And this market is about the same.

If you’re like me, you watch stock indexes every day. And this year they have provided thrills on a weekly and even daily basis.

If you look at a chart of the Chicago Board Options Exchange’s Volatility Index (also known as the VIX), you can see that clearly. 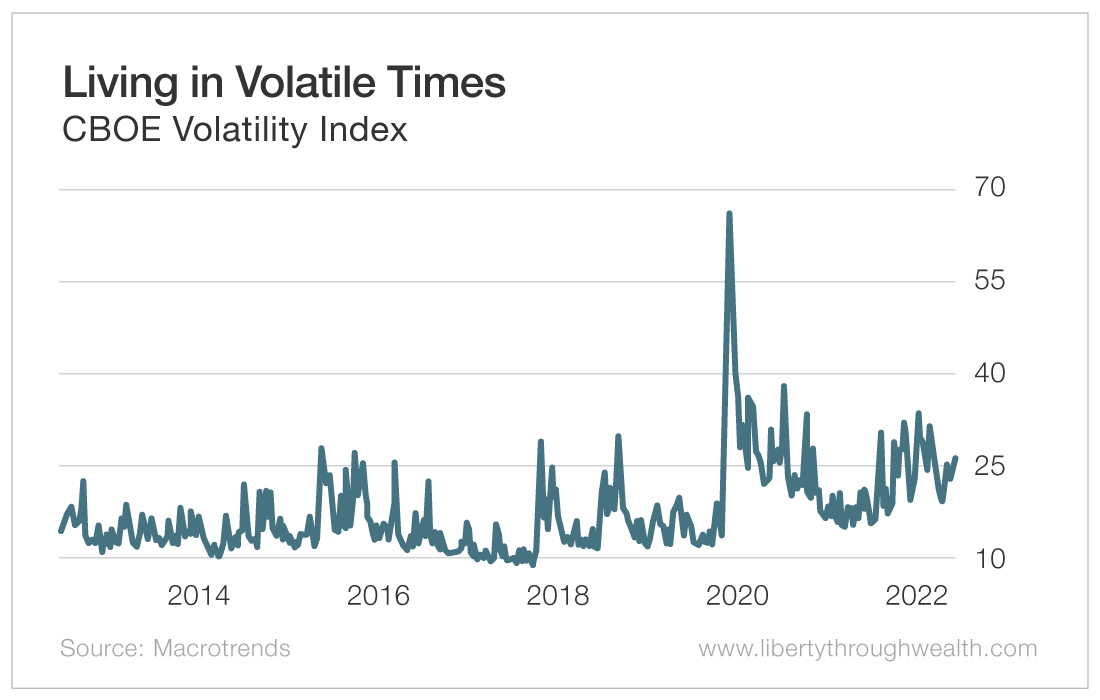 But in the eight years that preceded the pandemic (2012 through 2019), volatility averaged only about 15.

So in comparison to the pre-pandemic years, these are indeed volatile times.

Why are markets so volatile?

I suppose it’s primarily because we’re still emerging from a catastrophic global event that altered the way we live, work and trade. It also evoked unprecedented policy responses, including voluntarily shutting the U.S economy down and then pumping trillions of dollars of fiscal and monetary stimulus back into it to jolt it back to life.

And yet, while the market has had dramatic moves since mid-May, the net change has been just about 1%.

That’s why it’s so important to take a step back and look at the long-term trends.

My colleague Alexander Green did just that in a recent piece on why he’s not bothered by bear markets.

When you do look back, Alex points out, you’ll see that the best buying opportunities are in bear markets.

In fact, like Alex, most great investors view bear markets as buying opportunities.

Warren Buffett’s Berkshire Hathaway (NYSE: BRK-B) made some $45 billion in net purchases in the stock market in the second quarter, one when the S&P 500 fell 16%.

That followed $41 billion in stock purchases in the first quarter, when the S&P dropped about 6%.

But here’s what’s really telling about those investments… Berkshire reported a net loss of $53 billion in the second quarter due to the overall market falling sharply. Three of its biggest holdings – Apple (Nasdaq: AAPL), Bank of America (NYSE: BAC) and American Express (NYSE: AXP) – all fell more than 20%.

Does this mean Buffett’s purchases were a failure?

Not at all. It means he’s looking at the long-term value of these stocks and ignoring daily and weekly volatility.

We should do the same.