For 60 years, Americans paid the same amount for a bottle of this popular soda.

That was due to a clause inserted into the contract by Coca-Cola’s original owner, Asa Chandler, when he sold the company to lawyers Benjamin Thomas and Joseph Whitehead.

And while it didn’t help the new company owners with their bottom line… it certainly helped with sales! Coca-Cola has been one of the biggest brand names in the world for years.

But the cost of anything staying the same these days is highly unlikely. Due to rising inflation, what cost $1 at the turn of the century would now cost $1.63. That’s 63% more in just over 20 years.

So, the money in your wallet and your bank account has lost 63% of its value in just two decades!

And even Coca-Cola isn’t immune to inflation today. A bottle of Coca-Cola now costs about $1 dollar.

Two Assets to Shield Your Wealth From Inflation

You see, global central banks – including America’s Federal Reserve – have created more than $30 trillion in new fiat money since the 2008 financial crisis.

That means the buying power of each dollar in your savings account is decreasing month after month.

[Learn More: A Little-Known “Glitch” in the Crypto Markets that Could Hand You Daily Profits]

But ironically, stock markets and other assets keep rising.

That’s all part of the distortion between the markets and the real economy I’ve been telling you about. And it’s not about to change any time soon.

And while making money in the markets is great… it can be risky. If you owned stocks in September 2008, March 2020, or January 2022, you’ll know exactly what I mean.

That’s why holding assets in your portfolio that can shield your wealth from the effects of governments’ crazy monetary policies is also important.

Last month, I showed you why both gold and Bitcoin protect the value of your hard-earned money.

And in this era of rampant inflation, that protection is needed more than ever.

Now, I know some readers may be skeptical of Bitcoin. But I believe it deserves to be part of a balanced portfolio, alongside gold…

As I wrote to you in a recent essay on the merits of gold and bitcoin:

Holding both gold and bitcoin in your long-term investment portfolio is just the pragmatic thing to do. They both have a crucial role to play in protecting the value of your hard-earned money over time.

Today, I want to share another aspect of these two fiat-currency alternatives. It highlights why they will remain great stores of value…

And that is… they are both “hard” assets.

[Don’t Wait: Many of these Legitimate Cryptos Still Trade For Just Pennies – It’s NOT Too Late For Big Profits!]

In this case, “hard” doesn’t mean something that is physically hard. It means hard to produce.

The best way to measure an asset’s hardness is to look at its Stock-to-Flow (SF) ratio.

The “stock” part refers to the amount of something available. It’s the supply already mined. It’s available right away.

The “flow” part refers to the new supply added each year from production.

The Stock-to-Flow (SF) ratio = the number of years of new supply (flow) needed to equal the current supply (stock).

A high SF ratio means that the new supply is small relative to the existing supply. It indicates a hard asset.

A low SF ratio means that the new supply is large relative to the existing supply. So, it can sway the market balance easily. 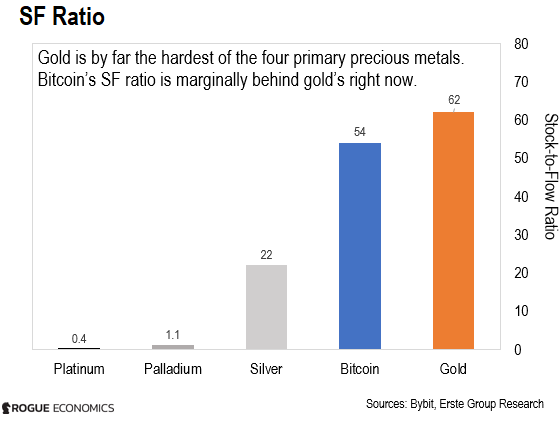 Looking first at the metals… Gold is the hardest. It has an SF ratio of 62. At the current rate of new supply, it would take 62 years to equal the existing gold supply.

At 54, Bitcoin is just behind gold. So, it would take 54 years of current supply to equal the existing supply.

[Discover: A tiny device that has netted some folks up to $2,000 in passive crypto income… Every single month!]

Bitcoin Will Be the World’s Hardest Asset

Now, humans have used gold as money for over 5,000 years. It is an excellent store of value. That’s because it is relatively hard to produce. And that won’t change any time soon…

Bitcoin has only been in existence since 2009. So, I understand why some readers may not have taken the plunge yet.

Bitcoin (BTC) is on track to become the hardest money the world has ever known.

As I explained last month, there can never be more than 21 million Bitcoins. This is written into Bitcoin’s code. As of writing, there are 18.9 million Bitcoins in existence. That’s about 90% of the total potential supply.

The new Bitcoin supply drops by 50% roughly every four years. This is known as “halving.”

Bitcoin “miners” receive Bitcoins as a reward for processing transactions. A Bitcoin halving event is when that reward is cut in half.

The bottom line is that the remaining 10% of new Bitcoins will be added at an ever-decreasing rate. And this will affect its hardness, as you can see in the next chart… 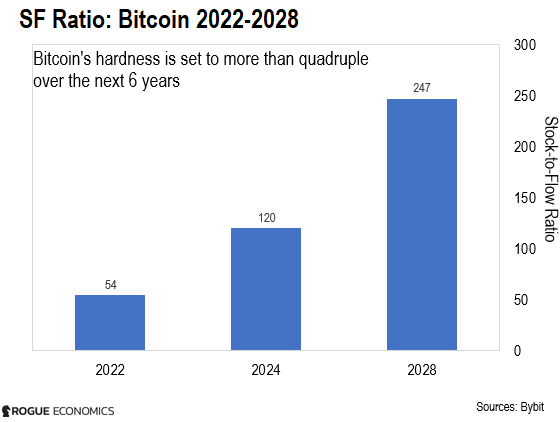 By 2028, Bitcoin’s hardness is set to more than quadruple. But what about gold?

We can’t predict the exact new supply of gold or its SF ratio. That’s because unlike Bitcoin, its supply is based on many factors, including market demand, price, new mine openings, etc.

So even if it reaches that level again in the next few years – which I think is unlikely – it won’t be anywhere near as high as Bitcoin’s SF ratio.

So in just six years, Bitcoin will be four times harder than gold.

And that means it is another great alternative to the fiat currency system if you want to protect the value of your hard-earned money.

The Pragmatic Approach to Investing

As I told you last month, holding both gold and Bitcoin (BTC) in your long-term investment portfolio is the pragmatic thing to do.

It is always a good idea to have assets in your portfolio that are both scarce and hard to produce. Especially when the value of the fiat money in your wallet is falling by the day.

Right now, gold and bitcoin are two of the “hardest” assets there are.

For exposure to gold, consider the SPDR Gold Shares ETF (GLD). It closely tracks the price of the metal, offering convenient exposure.

As for Bitcoin, there are many ways to buy it. One way is to purchase BTC on a crypto exchange such as Coinbase and store it in a crypto wallet.

But if you are buying bitcoin for the first time, PayPal or Block’s (previously called Square) Cash App may be more convenient options. With both of these popular apps, you can start your crypto portfolio with as little as $1.

Or consider using Swan Bitcoin. It’s a relatively new platform that I’ve started using. It offers easy, regular savings options to convert your dollars to Bitcoin savings. And its fees are low compared to many larger platforms.

Happy investing, and I’ll be in touch again soon.