The tech-heavy NASDAQ just had its worst January since 2008…

Both fell nearly 30% in a single day… with Meta’s $230-billion plunge marking the biggest collapse in market value for any U.S. company.

Between the Fed’s desire to raise rates… 30-year record-high inflation… and other worrisome market developments, even the most experienced investors are getting nervous.

But that’s why I want you to pay special attention to the idea I’ll share today… because it’s insulated from wild market swings.

And for most of the last century, it was only available to the Wall Street elite.

Today, I’ll explain how you can take advantage of the opportunities in a “hidden” market…

The “hidden” market I’m talking about is private equity.

During my time on Wall Street, I discovered a secret… There are really two markets: The “hidden” market, where the rich and connected make their millions… and the stock market for everyone else.

The hidden market is private equity. And it’s the playground of venture capitalists.

According to McKinsey & Company, this market has over $5 trillion in assets under management. For years, Wall Street has walled it off from you.

And for good reason: The gains it’s pocketing are truly massive – far bigger than what you get with regular stocks.

You can see in the chart below that the average venture capital (VC) fund trounces the returns of public markets over the long haul: 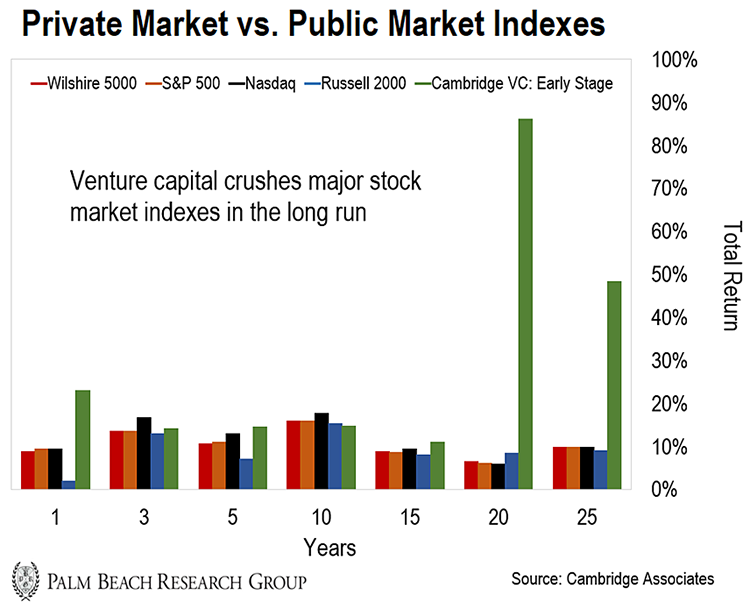 That’s not a typo. Early-stage, private companies have returned more than 12x as much as public companies during the past two decades.

And now, new Securities and Exchange Commission (SEC) rules allow ordinary investors to get in the game and invest in private companies before they go public…

They’re called Regulation CF and Regulation A+ offerings. The main difference is the amount of money each type of deal can raise.

Minimum investments for Reg A+ deals generally range from $250–1,000. And you can often participate in a Reg CF offering with as little as $100.

Companies raising funds through a Regulation A+ or Reg CF offering are private. And since they don’t trade on public exchanges, their valuations aren’t affected by market volatility.

By operating as private entities, they’re able to methodically execute their business plans outside of the wild swings of the public markets.

The best private companies can easily build up substantial war chests, too. Then they can use that money to buy distressed assets on the cheap whenever volatility creates bargains.

Meanwhile, if the market remains volatile, they can stay private until conditions are more favorable for going public.

For all these reasons, studies by research firms like Blackstone and KKR show that private companies outperform the S&P 500.

They also have lower volatility than publicly traded companies.

And they perform better during challenging times.

So, with all the volatility we’re seeing in the public markets, now’s a great time to get some exposure to the best private companies.

How to Invest in Private Companies Without Losing Your Shirt

Their shares can be illiquid or restricted, and money invested could remain unavailable for years… if it’s ever returned to investors at all.

Nine out of 10 startups normally fail. And even the best VCs strike out from time to time.

So you shouldn’t invest any money you can’t afford to lose.

Yet as you can see below, just one multi-bagger can more than make up for a string of duds…

That’s why plenty of early-stage investors – including firms like Sequoia Capital, Andreessen Horowitz, Kleiner Perkins, and Greylock Partners – are willing to take the risk.

They aim for 10x or higher returns.

They also spread out their bets. So if just one of the 30 or 40 private companies in their portfolios becomes a huge winner, it more than makes up for a streak of losers.

Essentially, they practice the same type of asymmetric investing that we recommend to you.

When you position-size correctly, the potential gain far outweighs the risk.

In the case of private market investments, I might recommend allocating a small amount to any one idea ($200–400 for smaller investors or $500–1,000 for larger investors).

Remember, you can access private crowdfunding deals with small sums – sometimes as little as $50 – and make outsized gains. But no amount of vetting is fail-proof. Even the best startups can go to zero.

Keep your positions small and invest in a decent number of private companies to further spread the risk.