From enthusiastic cheers of late to Tuesday’s jittery jeers, bearish seasonality could finally be coming into play in the market. And to smartly prepare for more memorable price action, large-cap tech stocks Amazon (NASDAQ:AMZN), Facebook(NASDAQ:FB) and Netflix (NASDAQ:NFLX) are well-positioned for trading.

It’s been a terrific September for bullish investors and one which has defied historical tendencies. The S&P 500 hit fresh all-time-highs just last week and the broad-based market barometer is up over 3% with just a couple trading sessions left in the month.

But Tuesday’s broad-based decline may have been a shot over the bow for the market’s rally. And beneath the surface there are other signs already supporting a threat to the market — beyond headlines of impeachment threats for President Donald Trump or elevated trade war worries.

The Nasdaq, with its heavy percentage of large-cap tech stocks, is now only up a very flat 0.4% for September. That’s not good, right? The index also failed to climb to a new high. More bad news? It’s not hard to think this divergent price action and relative weakness could be the proverbial canary in the coal mine for bullish investors.

It would be foolish to ignore the real possibility of an October market correction. And while this scenario would certainly be disruptive, it could also be a highly profitable period for well-prepared investors positioned in these three large-cap tech stocks. 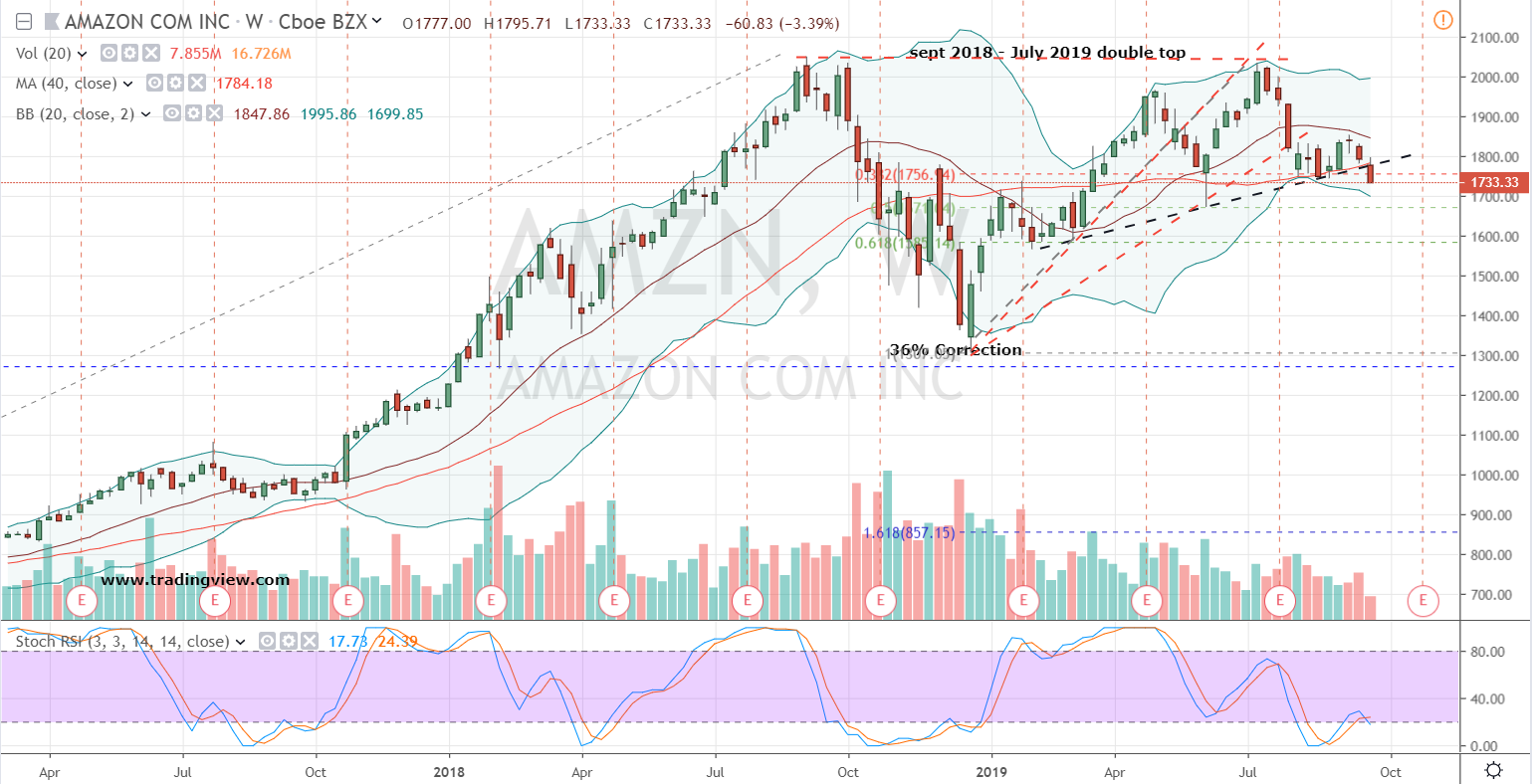 Amazon is the first of our tech stocks to sell, or more aptly, short. Technically, Tuesday’s price action broke a supportive trend line dating back to the spring, as well as the 38% Fibonacci level. But that’s not the worst of it.

Yesterday’s decline in shares of AMZN also signaled a third broken support line that’s formed since last December’s ubiquitous market bottom. Along with a double-top pattern which completed this summer and stochastics signaling an alarming bearish crossover just out of oversold territory, there’s more than a few reasons to support shorting this tech stock today.

For this tech stock, I’d take initial profits in the Fibonacci-backed support area between 50%-62%. More specifically, I’d have an eye on a challenge of the lower level near the psychologically important $1,600 price tag in AMZN stock for reducing the position. Likewise, I’d exit and limit the risk if Amazon is able to climb above $1,800 on a closing basis. 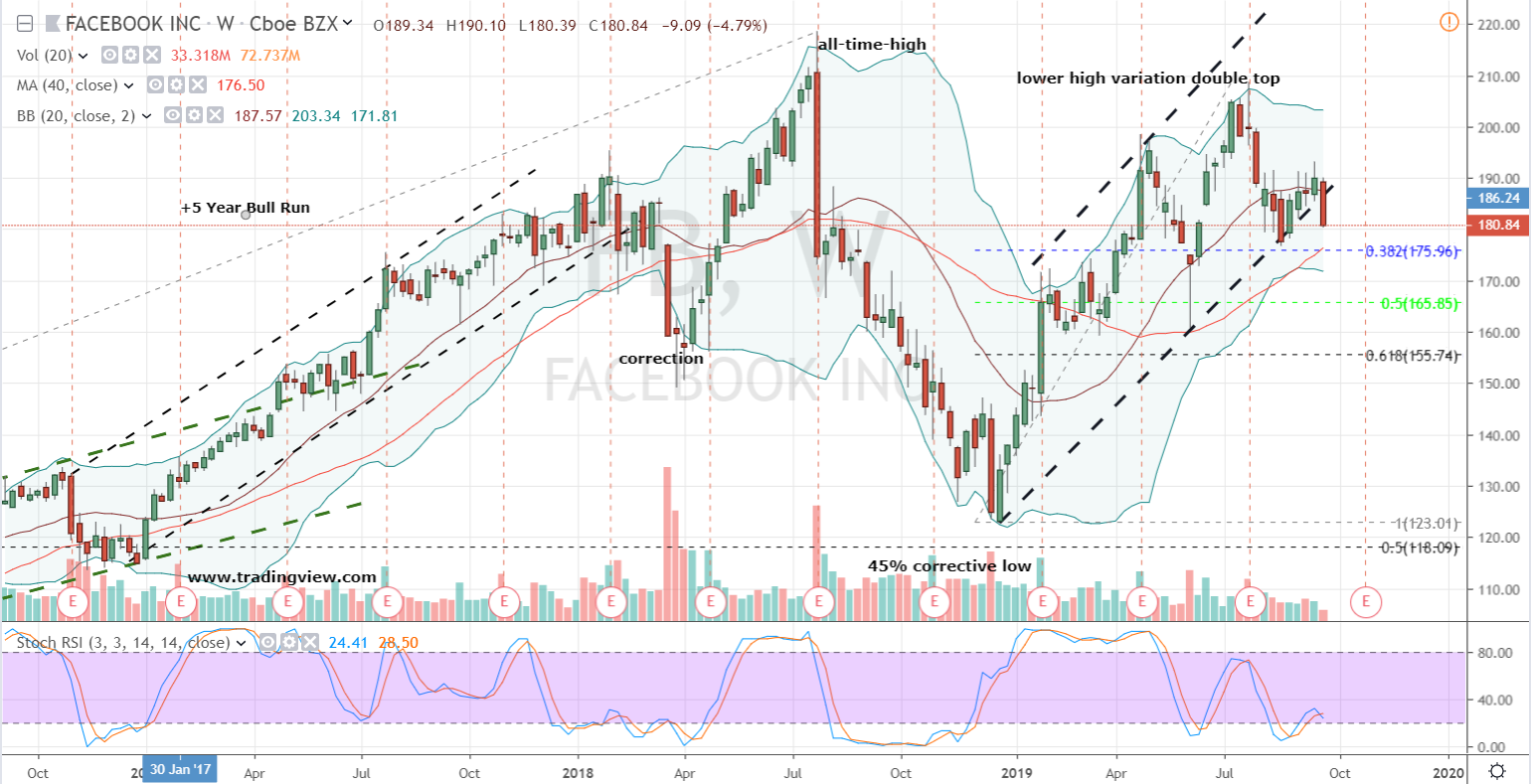 Facebook is the second of our tech stocks to short right now. The social media giant looks ripe for a larger correction should the market begin to pay respect to seasonal bearish tendencies and crash in October.

On the weekly time frame, FB stock has just broken channel support from its December bottom. There’s a weaker variation of a double top in place and bearish-looking stochastics set up. Shorting shares in anticipation of a larger price decline looks stacked in favor of this tech stock’s bears.

For this tech stock I’d take initial profits within the Fibonacci-backed support area from $155-$165. And to contain exposure, exit the short if FB stock rallies above $191. 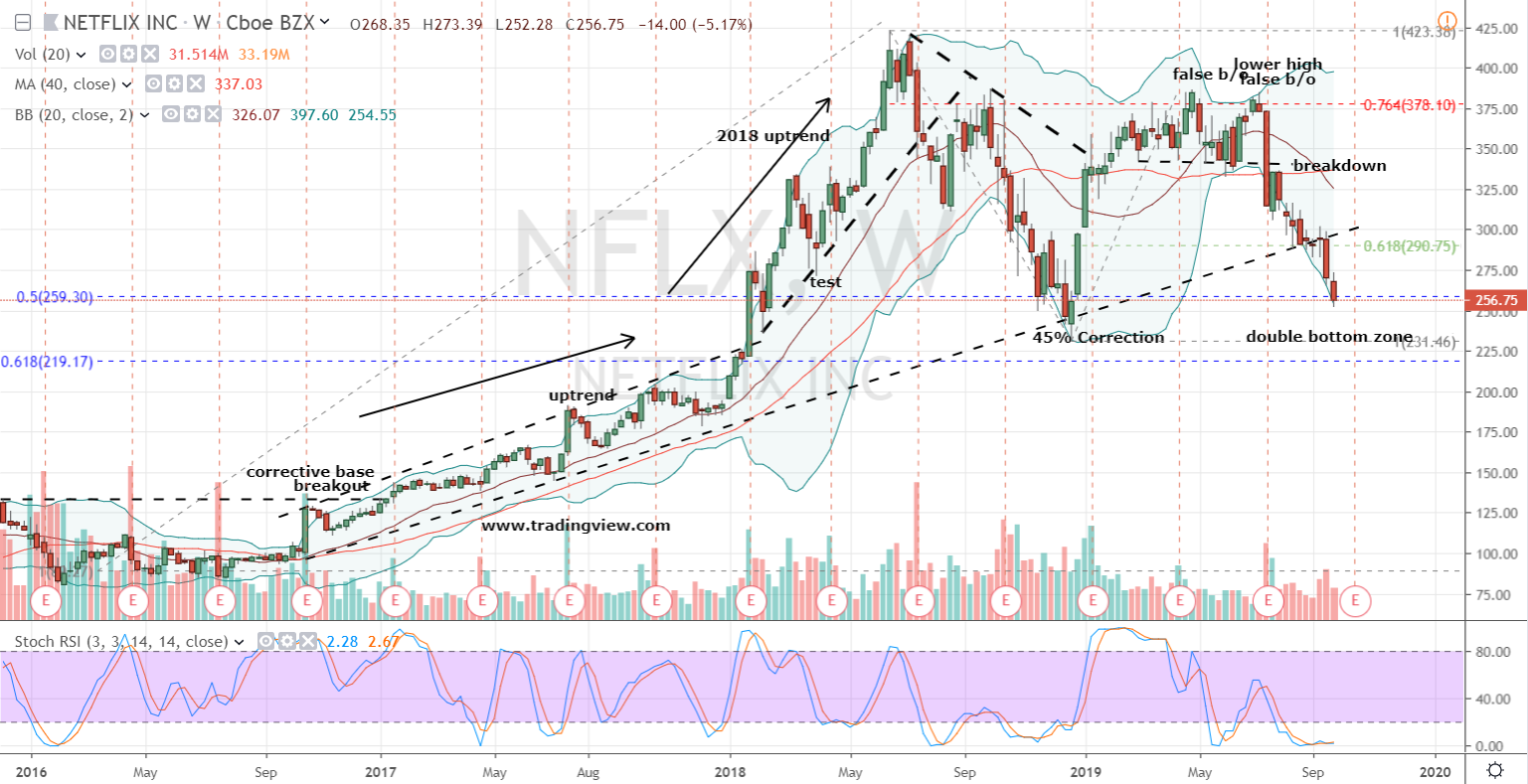 Netflix is the last of our tech stocks to trade in preparation for a market crash. And for readers that have followed my bearish views on the video-on-demand giant in recent months, this trade is a bit of an unusual October treat. I now finally see NFLX stock as a “buy.”

The bullish shift in sentiment follows Netflix’s sizable corrective decline of nearly 35% since late July. It’s moved into a very supportive Fibonacci zone from roughly $220-$260. This zone is backed by the 50% and 62% levels dating back to early 2016.

As this well-supported price area also offers the possibility for a double-bottom to develop, NFLX stock is rightfully a hedge for the shorts in FB and AMZN stock. In fact, this tech stock could turn into a market-leading happy ending for bullish investors.

I’d suggest traders wait until a full-fledged weekly chart reversal candle is confirmed by bullish trade through above the pattern high the following week. I’d also smartly use the low of the two candle formations to exit if needed.

There’s no reason to be a hero in NFLX stock. It’s still only late September, so there might be better opportunities ahead for patient and prudent investors.