In other words, prices will rise when central bankers expand the money supply faster than the economy increases goods and services. The changes won’t happen overnight.

There’s a ripple effect as the first beneficiaries of the new money spend it first. But the changes will happen.

The past few years of massive money printing have shown how true that is.

The chart below shows the M1 money supply – the measure of the total amount of money in circulation – as calculated by the government. And we’ll continue to see politicians run deficits and the Federal Reserve expand the money supply as they embrace what I call “Free Lunch Theory” (FLT).

The rate of money the federal government is pumping into the economy has slowed since the early days of the pandemic. But some states are still handing out “inflation checks” to offset higher prices.

When you hand out checks to help people with higher prices with no thought of the consequences, that’s Free Lunch Theory.

The irony of FLT is that giving out more money just stimulates demand, which keeps prices high.

On top of that, earlier this year President Biden signed the Inflation Reduction Act, which, ironically, will spend billions of dollars on everything from reducing prescription drug costs to increasing green energy initiatives.

More government spending will cause prices to rise… This will continue causing your purchasing power to drop, as seen in the chart below. 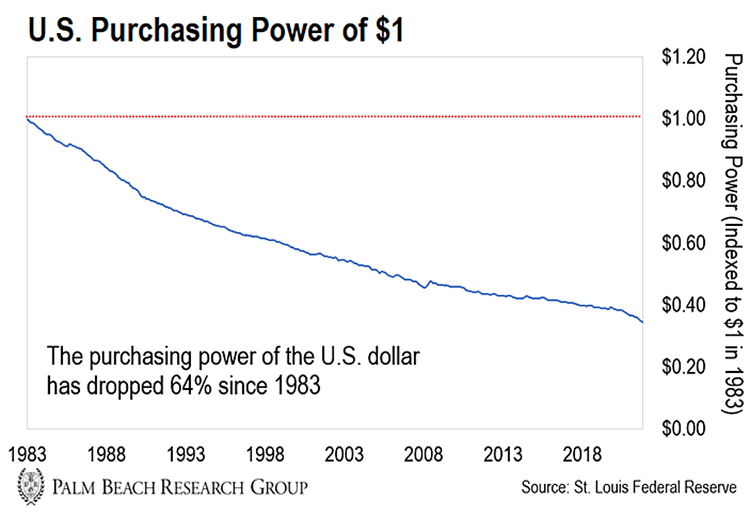 The fact of the matter is our political leaders and the Fed are being willfully blind.

They must know inflation is a monetary phenomenon… it’s an inconvenient truth they choose to ignore so they can incur debts far beyond our nation’s ability to repay.

Here’s a kicker for you… current interest rates are still under the rate of inflation.

That means we’re not even really beginning to tighten yet… rates have to go to 8.5% just to match inflation. Historically bonds pay 165 basis points above the inflation rate.

If that were true today, the 10-year treasury would yield nearly 6%.

I’m not expecting rates to go that high because interest payments at that level would expand the federal deficit by 38%. But it shows you how far things could theoretically go.

On top of this, the United States has now seen two-quarters of negative GDP growth… the textbook definition of a recession. Today’s politicians don’t want to call it that, but that’s what it is.

I’m no Debbie Downer, but I can understand why folks are very negative right now. Here’s the thing, though, it’s a mistake to fear recessions. Recessions bring hardship, yes, that’s true, but they also bring massive opportunity.

Equity prices are the cheapest they’ve been in 2 years. In certain pockets of the market, you have world-class companies earning billions of dollars and trading at valuations not seen since the crash of 2008.

Fear is running high because investors are afraid the Fed may inadvertently trigger a financial crisis. The Street is not wrong to fret. In 2004 the Fed kicked off a round of rate raises that didn’t end until rates hit 5.25% in 2006, up from 1.25%.

The 2004–2006 rate hike cycle inadvertently pricked the housing bubble, which then kicked off the Great Financial crisis, which crashed the global economy. This is why fear is so elevated and why many stocks are so cheap.

My answer to these fears is… I don’t think so.

Also, the banking system is financially much stronger. Mortgage underwriting rules are much more stringent than in the early 2000s. Employment is still high, and while people have less buying power for their dollars, they still earn.

I’m having trouble foreseeing a truly dire outcome unless some massive fraud or black swan is sitting on the books of Wall Street or corporate America.

Short of that, it looks to me that stock prices are already well on their way to pricing in a recession. Fear is rampant. Valuations are reasonable. Most people hate the stock market right now. And to me, that sounds like a recipe for a buying opportunity.

So long as you have at least a three-year timeline, this is a fantastic time to be in the market for great companies.

Will you get the exact lows? No. You won’t. But the price you paid today will look like a huge bargain three years from now. Is this easy to do? No. It is not. Like you, I still struggle to put money to work when the market drops.

Psychologically it’s so much easier to put money to work when the market is running and gunning higher. I’ve had to force myself to rewire my brain to allocate more money to stocks during down markets and less money during bull markets.

One strategy I use during times like this is about to enter a golden zone I call an “Anomaly Window.” This particular window only happens once every four years.

What’s great about this strategy is that during one of these four-year Anomaly Window cycles, blue-chip stocks (the exact stocks you want to buy right now) can provide wild, out-of-control bull market-type gains… even in a bear market.

Right now, we’re on the edge of a rare market phenomenon… an “Anomaly Window” that only comes around once every four years…

It only lasts 30 days. But within those 30 days, blue-chip stocks can return decades of market gains in a brief period.

Those are real Anomaly Window returns.

Now, I want to be clear with you… this has nothing to do with cryptocurrency or pre-IPO deals.

Right now, I know of no other strategy to play this market better.

[Biden Bucks: Executive Order 14067 could pave the way for a social credit system just like China]