Fed Chair Jerome Powell spoke three times this week! He made comments last week as well when the Committee’s statement was released. Each time, he said pretty much the same thing. The economy is bouncing back quicker than expected, but it’ll take a long time for it to reach the levels that would necessitate a change in policy. Therefore, these super accommodative days are here to stay for now!

Investors may be worried about rising bond yields and an overheated market… because investors just have to worry about something. But all signs point to an economy that’s going to see a lot of growth as the pandemic is brought to its knees and people go back to their normal lives.

Therefore, let’s take a look at the Zacks #1 Rank Growth Stocks again. Not only does this screen look for strong buys, but it also wants stocks that have at least a 20% historical growth rate and a 20% or more projected growth rate. In other words, we want to see growth yesterday, today and tomorrow.

Below are three names that recently passed the test:

Analysts don’t usually reward companies that miss quarterly earnings and revenue expectations. But estimates for Rent-A-Center have advanced over the past month despite this lease-to-own giant falling a bit short of forecasts. Actually, estimates have soared in the double digits of late. So what gives?

A strong guidance can cover up a lot of shortcomings. An encouraging outlook (especially in the current environment) is pretty much the best hand a company can have when showing their cards during earnings season.

Even though it missed expectations in the fourth quarter, RCII still saw healthy year-over-year improvements. Earnings per share of $1.03 missed the Zacks Consensus Estimate by only a penny but improved more than 77% from last year’s 58 cents.

Likewise, total revenue of $716.5 million missed expectations but was up 7.3% year-over-year. Revenue actually improved across all its segments. Same-store sales growth in the Rent-A-Center business segment and higher Preferred Lease revenues were the big factors in this growth.

RCII made investments for enhancing its multi-channel platform, which will help them serve customers for the rest of this pandemic and beyond. Like every other successful retailer during these troubles, it has been enhancing its e-commerce and digital offerings.

Furthermore, the company concluded its buyout of Acima Holdings this year, which is a growing profitable LTO fintech company. RCII believes this acquisition will significantly improve long-term growth and profitability. 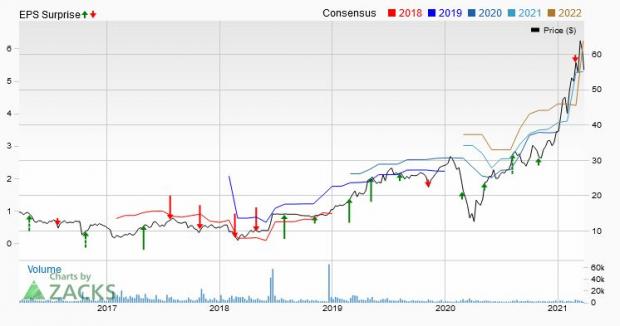 It’s kind of weird to think that your mattress might have an IQ, but how else can you explain Sleep Number Corp. surging by more than 450% over the past year? Traditionally speaking, there’s not much to a mattress; some springs, a bit of padding, and a tag that will send you to prison if you dare remove it.

But SNBR is in a class by itself. The company makes 360® smart beds with their proprietary SleepIQ® technology that supplies adjustable, personalized comfort for each sleeper. You can decide things like the firmness or temperature of your bed. It even saves marriages by providing gentle adjustments to stop your partner from snoring.

SNBR provided the right kind of products at a time when people were doing all they could to make their homes more comfortable. But the company was performing well even before the pandemic. Its fourth-quarter report from February marked the ninth straight quarter with a positive surprise.

Earnings per share of $2.19 in the quarter beat the Zacks Consensus Estimate by more than 43% and improved over 160% year over year. Revenue of $567.9 million topped our expectations by more than 1% and advanced 29% from last year.

The company has been leveraging the power of vertical integration and digitization in this environment. Such moves should help SNBR with profit growth for years to come, long after the pandemic becomes history.

[Alert: Rare convergence of 3 economic triggers is about to set off a buying frenzy in tech stocks] 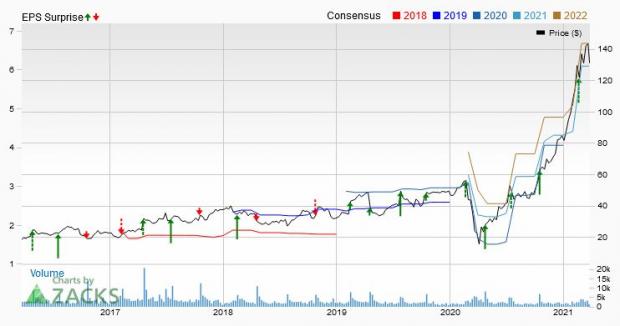 With exposure to the smartphone and automotive spaces, it’s no wonder why Amkor Technology has been able to beat the Zacks Consensus Estimate for 11 straight quarters. And that’s not likely to end when the pandemic does. A new car and a new phone might be just what’s needed as we embark on the new normal.

AMKR is one of the largest providers of semiconductor packaging and test services. It packages and tests integrated circuits for chip manufacturers, fabless semiconductor companies and contractor foundries. Its product portfolio is composed of Advanced Products and Mainstream Products.

Shares of AMKR are up 155% over the past year and 39% so far in 2021. As part of the electronics – semiconductors space, the company is in the top 28% of the Zacks Industry Rank.

Last month, AMKR reported fourth-quarter earnings per share of 52 cents, which trounced the year-ago result of 41 cents while beating the Zacks Consensus Estimate by more than 40%. That was actually a rather modest beat for the company, as its four-quarter average surprise in just under 360%.

Revenue of $1.37 billion advanced 16.3% from last year and topped our expectations by 5.5%. Better-than-expected demand for smartphone and automotive products led to this performance, as well as solid cost-control efforts.

For the full year, net sales of $5.05 billion soared 24.6% from the previous year. That’s an improvement of nearly $1 billion.

The company expects a good 2021 as 5G deployment, high-performance computing, IoT wearables and the automotive space should lead to strong demand for AMKR’s services. Revenue in the first quarter is expected to improve 15% from that of 2020.

Earnings estimate revisions are reflecting the company’s optimism. The Zacks Consensus Estimate for both this year and next has improved 33% over the past 60 days. The 2021 expectation is now at $1.80, while 2022 is at $2. That suggests a year-over-year improvement of about 11%. 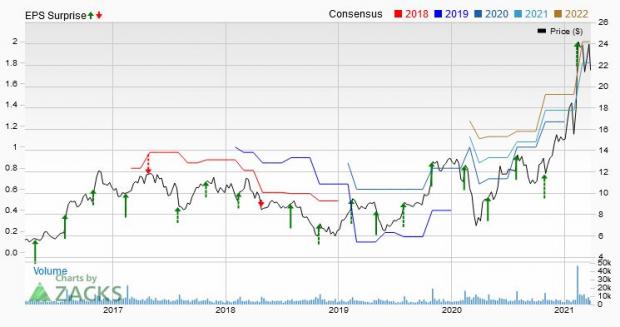 [Learn More: The next couple months could determine who will become extremely wealthy in 2021 – and who won’t]