As technology evolves, the victims always pile up…

Ironically, it was a 24-year-old Kodak engineer named Steven Sasson who developed the first digital camera in 1975 using leftover parts from around Kodak's factories. Sasson's prototype was the size of a toaster and took 23 seconds to take a black-and-white photo. As he later told the New York Times…

But it was filmless photography, so management's reaction was, “That's cute – but don't tell anyone about it.”

Every digital camera that was sold took away from a film camera and we knew how much money we made on film. That was the argument. Of course, the problem is pretty soon you won't be able to sell film – and that was my position.

Consumers rapidly switched to digital photography and stopped buying film. And Kodak failed to compete effectively in the new world. The company filed for bankruptcy protection in 2012.

New technologies bring disruption. They create winners – and losers. Today, I'll show you how this pattern plays out again and again… and why we can expect a new wave of winners in the next decade.

When Apple (AAPL) introduced the first iPhone in 2007, it had a small 3.5-inch screen and a low-resolution, two-megapixel camera…

Apple's competitors weren't impressed. Executives across the tech industry didn't think the iPhone would be a serious player.

Even with the Mac, Apple attracted a lot of attention at first, but they have remained a niche manufacturer. That will be their role in mobile phones as well.

Steve Ballmer, who was the CEO of Microsoft (MSFT) at the time, famously dismissed the iPhone, saying…

That is the most expensive phone in the world. And it doesn't appeal to business customers because it doesn't have a keyboard. Which makes it not a very good e-mail machine.

And BlackBerry's (BB) co-CEO at the time, Jim Balsillie, shared the sentiment…

It's kind of one more entrant into an already very busy space with lots of choice for consumers… But in terms of a sort of a sea-change for BlackBerry, I would think that's overstating it.

But over the next 15 years, Apple sold more than 2.2 billion iPhones, becoming not only the bestselling smartphone, but the bestselling consumer product of all time. The latest model, the iPhone 13, features a 12-megapixel camera and the ability to record high-resolution video in 4K. 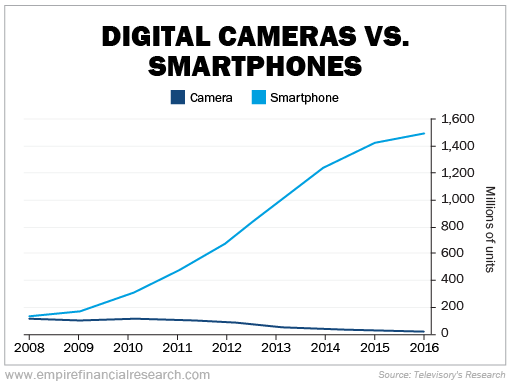 Smartphones have killed off a whole host of other products, including pay phones, pagers, GPS devices, and alarm clocks.

And just like Apple, most of the biggest winners of the past two decades have left a path of destruction behind them…

Think about the dozens of businesses that retail giant Amazon (AMZN) has wiped out, including big names like toy store Toys “R” Us, bookseller Borders, and electronics retailer Circuit City.

Yet even as recently as a few years ago, executives at brick-and-mortar retailers were skeptical about Amazon. As Foot Locker (FL) CEO Richard Johnson said in a 2017 earnings call…

We do not believe our vendors selling product directly on Amazon is an imminent threat. There is no indication that any of our vendors intend to sell premium athletic product, $100-plus sneakers that we offer, directly via that sort of distribution channel.

At the time, Foot Locker's market cap exceeded $10 billion. Today, it's worth $2 billion.

As technology evolves, the victims always pile up.

People are always skeptical about the future, until it's here. The good news is that you can flip this on its head to find the likely winners of the next decade…