You measure their temperature with a touchless thermometer. The first reading says 99.2 degrees Fahrenheit. That’s a little high, so you do it again.

The second reading says 145 degrees… obviously wrong. So a third and fourth time, each one says 99.2 degrees and you throw out the reading of 145 degrees.

That extremely high reading is what we call an “outlier.”

In statistics, an outlier is a data point that differs significantly from other observations.

That’s why outliers are often excluded from data sets. They can muddy an otherwise clear picture.

Now, this makes sense in most scientific scenarios. But it doesn’t always. Sometimes you want to keep outliers.

(Don’t worry. In a moment, I’ll show you how you can make life-changing profits from this idea).

So Tom Brady has won one-third of the Super Bowl games he’s seen in his career… and won seven out of the 10 he’s played in.

That is a statistical outlier: a clear deviation from all other quarterbacks in history. But do you throw him out of the data set? Absolutely not. In this instance, Brady becomes the data point to pay attention to.

Here’s why I’m telling you this…

If you really want to make money in the markets, you need to own what I call “outlier” stocks.

I’ll show you why below…

Longtime readers know I built a unique algorithm that uncovers these outlier stocks.

It picks them based on a few key factors. These are fundamental strength, bullish technical patterns, and most importantly, unusually large volumes of buying. This volume tells me a major Wall Street institution is getting involved – what I call the “big money.”

These filters narrow down the entire stock market universe to just 20 names each week. And from that, I start digging for more info to find the absolute best stock to buy.

These stocks have gone on to hand me – and my readers – unthinkable gains.

Since I started publishing my ideas to a small group of subscribers, I’ve posted a 91% win rate.

And I’ve seen an average position return of 126% and open gains as high as 1,000% in just a couple of years. (And that’s after recommending closing half the position to ride the gains for free.)

That’s why, when it comes to stocks, I say keep the outliers and forget everything else.

And I’m not the only one who thinks this way…

Statistically, these stocks are outliers. They would be ignored in traditional analysis.

But in doing so, an investor would throw out any practical chance of beating the market. So that’s why I’ve devoted my career to finding this 4% and reaping the rewards…

These Stocks Keep on Winning and Winning

Let’s take a look at one of the top outlier stocks: NVIDIA (NVDA).

It has appeared on my weekly quant-generated buy reports 77 times since the year 2000 – including back-tested data.

[Alert: Rare convergence of 3 economic triggers is about to set off a buying frenzy in tech stocks]

And even more impressive, it’s appeared in 53 weekly reports out of a possible 345 since I formally started publishing data science on stocks in 2014. (345 weeks have passed since July 1, 2014 when I made this my official life’s work.)

NVDA has naturally been a big winner since its first appearance on my live reports. It’s up 2,680% since then. And since I first recommended it to my subscribers, it’s up 225%.

(Note that NVDA is well above the suggested buy-up-to price I sent to my subscribers. I don’t suggest purchasing it at today’s levels.)

Here’s a chart of each NVDA buy signal, including back-tested data shaded in gray. 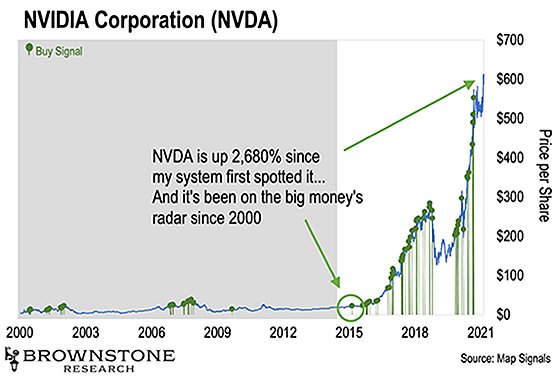 When it comes to analyzing stocks, not only should you keep the outliers – you should toss everything else. That’s where the real money is. Bessembinder proved it!

Using data science completely changed my investing career. It taught me the true path to independent wealth – buying and holding outliers like NVDA for consistent, outsized returns. Like Tom Brady, outlier stocks just keep winning… regardless of what the market does.

In such volatile markets where opportunities zip by every day, one can easily get overexposed to stocks with unclear direction. Following this system is what got me free of that, and it got me adding zeroes to my brokerage account.

[Learn More: The next couple months could determine who will become extremely wealthy in 2021 – and who won’t]

The three best buy and hold investments to purchase now include the hottest software startup since...