(And no, I’m not talking about Cadbury eggs for dinner… but you do you.)

In the first few months of the pandemic, new industries flourished, dedicating themselves to gobbling up market share of our “new normal.”

Enter Instacart. The then-8-year-old grocery delivery service saw five years’ worth of growth in five weeks as lockdowns swept across the country.

Its peers in the restaurant delivery business also saw historic growth – a collective revenue boost of $3 billion in the second and third quarters of 2020. 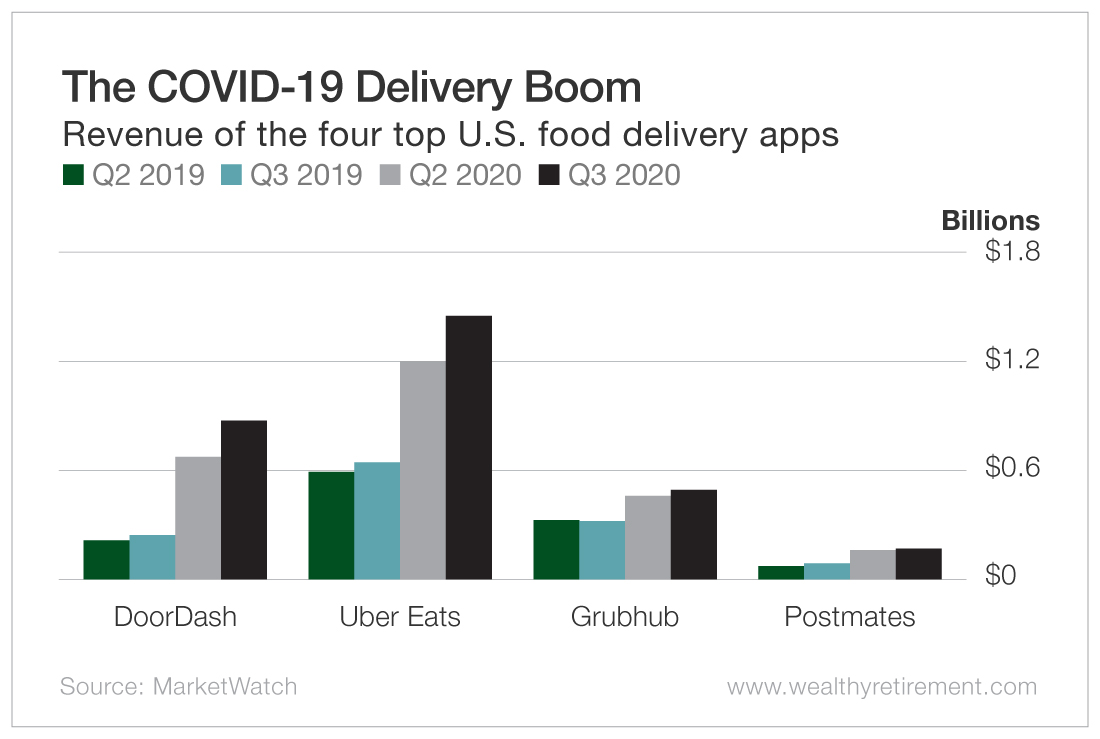 These businesses have not taken their pandemic home runs for granted, though. Anxiety about what comes next as restrictions are lifted has fueled an innovative arms race.

It was a snub to rival DoorDash (NYSE: DASH), who failed to merge with Postmates in 2018.

In response, DoorDash scooped up the robotic salad-maker Chowbotics and inked deals with businesses like Walmart, CVS and Walgreens.

The “delivery wars” have escalated… but these businesses’ existential angst may not be founded.

I caught up with Matthew Carr, Chief Trends Strategist at Wealthy Retirement‘s publisher, The Oxford Club, to ask him whether growth was still on the menu for delivery apps.

We’re seeing consumers increase their number of orders through one of these delivery apps, like DoorDash, Grubhub, Postmates, Uber Eats, etc. In February, these sales increased 37% from a year ago. That’s due to the fact that the pandemic forced people who had never used these services before to embrace them…

I think this is a fundamental shift. I’m not saying people aren’t going to go out to restaurants. Believe me, when the all-clear is given, restaurants will see business boom. But delivery apps are here to stay. And their growth will continue.

As usage continues to increase, revenue is expected to keep rising for these businesses, casting them as not just a “pandemic trend,” but the future of eating out while staying in.

Take the following chart, for example. Revenue for U.S. food delivery apps is expected to keep rising steadily from now through 2025, growing by more than $10 billion.

[Breakthrough: The World’s Most Successful Tech Giants are Buying into this Emerging Field] 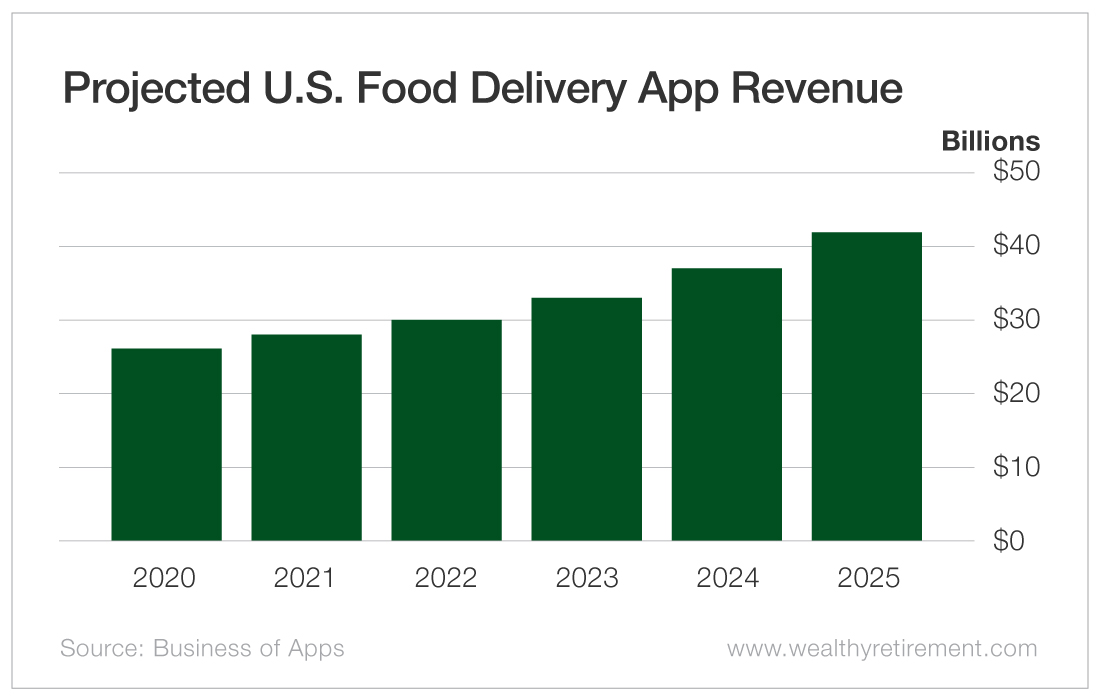 While many cities – like Wealthy Retirement‘s home city of Baltimore – have imposed caps on how much of a cut food delivery apps are able to take on their transactions, many restaurants do owe these businesses a debt.

For example, 23% of The Cheesecake Factory’s February 2021 sales came through DoorDash. And delivery apps would argue that by keeping the cost burden on restaurants, they lower costs to consumers – and low consumer costs encourage future orders.

The Course of True Grub Never Did Run Smooth

As these businesses continue to duke it out with each other, investors are left with one question: Who’ll be left standing when the music stops?

One clue comes from market share. As new rivals have emerged and grown, industry leader Grubhub has gradually lost its monopoly on the U.S. delivery niche, while DoorDash has greedily scooped up more and more of the market.

The following chart shows just how fierce the competition has become… and how 2020 was a turning point for several of these businesses. 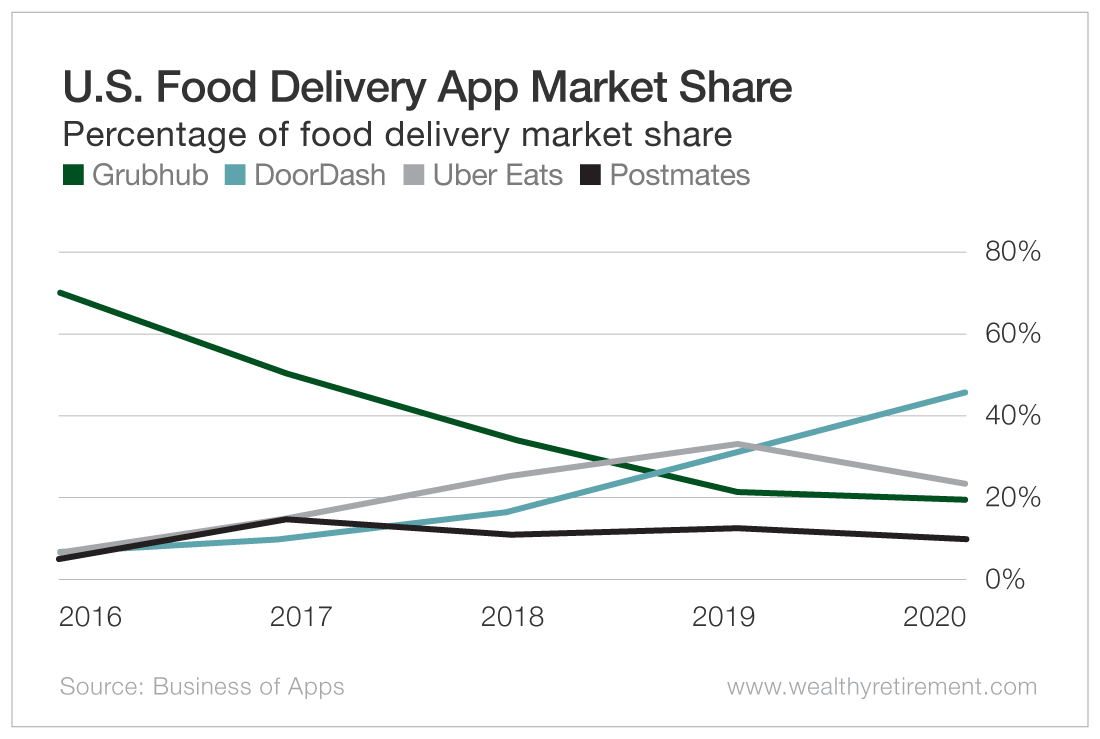 [Big Money: Google and Microsoft Just Put Over $4 Billion into this New Technology]

But market share isn’t everything. Case in point: Grubhub has grown revenue every year since going public, while DoorDash has never turned a profit.

(Of course, that didn’t stop DoorDash from soaring 80% on its very first day of trading.)

And according to Matthew, where a delivery app gains a foothold in the delivery wars could be just as important as how much it earns…

Now, who wins? They all do, in a sense. Because DoorDash, Grubhub and Uber Eats control different areas of the country. For example, Postmates is huge in Los Angeles. DoorDash controls San Francisco and Texas metro areas. Uber Eats owns Atlanta and Miami. Grubhub controls Philadelphia and Boston. So there are different regional aspects at play for each.

And then there are differences in demographics as well. Some companies focus on fast food, and others target the suburbs and families.

But the reality is, the delivery wars aren’t over. There is no clear winner. Because the war has only just begun.

Keep an eye on food delivery apps as the pandemic draws to a close. In the coming months, they may just serve up a surprise or two.

[Read On: Discover What Bill Gates is Calling the “Holy Grail” of Modern Tech]